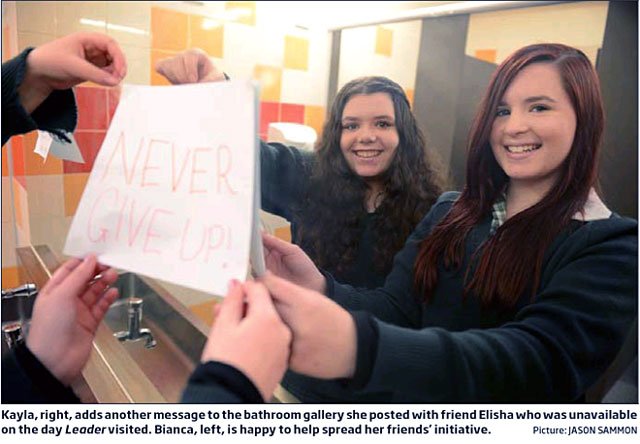 “YOU are all perfect, just the way you are.”
That’s just one of the positive messages 13-year-old Western Port Secondary College students Kayla and Elisha want girls to remember.

The Year 8 students wrote and stuck about 20 positive messages, cheesy lines and encouragement quotes across the girls’ bathroom at school.

“Some of my friends were quite upset through the week,” Kayla said. “It kind of affected me because they weren’t as happy as they usually are so I thought I might do something nice for them. We just wrote down , you’re beautiful, don’t worry what bullies say, you’re perfect just the way you are”.

The messages quickly spread across the school. “I know what it feels like to feel upset and feel like everyone hates you,” Kayla said. “When one person says something to you, it brightens your whole day and makes you feel good and I wanted everyone else to feel like that too”.

Assistant principal Hannah Lewis said it was one of the nicest gestures she had seen in the 20 years she had worked at the school. “The girls just walked out of the toilets with great big beams of happiness on their faces”, she said. Ms Lewis said what the girls did was important. “A healthy relationship is based on respect, honesty and compassion, not judgement and who is going out with who and who is the prettiest,” Ms Lewis said. “There was nothing in it for them, they were just wanting to make people feel better about themselves”.

Cyber Safe Kids founder Robyn Treyvaud said it was very significant action the girls had taken. “The kids decide for themselves, we want to change this youth culture”, she said. “How amazing these kids are when they say , enough is enough, we want to flip this around and we want to start being nice to each other. I think what they’re doing is pretty brave”.

She said they could extend it to positive messages online. “If they are going to be prepared to model the sorts of behaviours they want to see others follow or to exhibit themselves, they’re role models, they’re leaders as far as I’m concerned”, she said.

“Everyone, adults and kids – if you see positive things around you, it makes you react in a positive way. I think we need to see more of it”.