Ronny Edry is a graphic designer, teacher, husband, father of two kids and he lives in Tel Aviv, Israel. Ronny is the driving force behind ‘Israel Loves Iran’ on Facebook and who delivered a high impact speech on Tedx Talks. More than enough reasons for us to have a ‘behind the scenes’ interview with Ronny Edry, founder of The Peace Factory, in order to learn more about his motivations, personal beliefs and his future plans. More about Ronny’s activities can be found on his Soul Love Profile page. 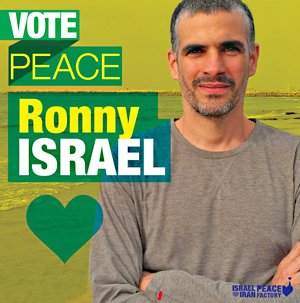 Soul Love: Yesterday I was watching your video about “Iranians in Tel Aviv – We Love you”. I saw buses driving through Tel Aviv displaying your messages. And this is only one of the so many projects you are working on. The beauty is that you have managed to humanize your message. This is so important as many of us have no idea what it feels like to be under pressure all the time.
What does it feel like to see the impact of your own messages?

Ronny Edry: I don’t know if I really see the impact so far. I saw the buses out on the streets when this campaign was running. So it’s nice to see that people looking at it, it’s nice to get comments, people giving you a phone call and say “hey, I saw your buses”, it is a feeling of accomplishing something. But it is also a long game. It’s a long run. It’s just kind of the beginning and it is also what you just said; humanizing the message, showing the faces of the people and trying not to talk too much but to show the people. It’s cool to watch the faces of the people out on the street. They’re looking at it and they’re like “what is this?” Most of them didn’t understand it because for most it was the first time they were looking at the images of Iranians and Israelis. Some of the people linked it to my Facebook messages because they have seen them and they ‘get it’, but for most of them this is new and they were really surprised. They are surprised because they are used to only seeing the negative stuff, especially related to politics. It’s all about fear and building up the enemy and the conflict. So for once it’s nice.

SL: You have received a lot of positive and loving feedback from all over the world. Were there also negative reactions and do you think fear plays a role in the reactions from Israelis and Iranians?

RE: At the beginning there were a lot of negative reactions. Especially on Facebook where people were trying to attack the page with spam, bad pictures, graphics of dead kids, stuff like that. But after a while it just stopped and they realized that we kept on spreading the messages. I think that at the beginning people didn’t understand what we were doing. They were like, “what are you talking about? We don’t know the Iranians and you are saying ‘we love you’?” It was like we were raising a white flag before the war even started. By doing this the people thought that we were very afraid. But this wasn’t the issue for us. We were trying to talk and trying to open up a line of communication and try to get to know the other side. And now that this has become so big the people understand it. Most of the messages we are receiving are positive now.

SL: What inspired you to step up to this initiative?

RE: I am not sure. It is what I do. I am a graphic designer and I have always something to say. I am always bitching about stuff. We just don’t know the Iranians and I don’t see the point of war in this world. Sometimes you understand it and you get the ‘why’ but this time I just don’t get the point. Why would the Iranians attack Israel? It doesn’t make sense. I just wanted to see if we could start talking to the people in stead of having conversations with the media or with politicians. And I have a message for these people.

SL: What is needed to stop the violence in the Middle East and how far are YOU prepared to go? 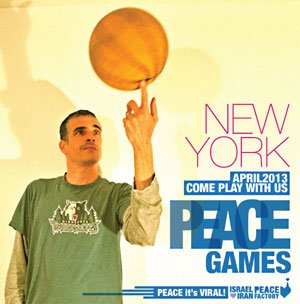 RE: I think what we need is more and more people who are willing to make a statement. And it’s very helpful that we have social media. We can start a real conversation and true communication. We didn’t have that before because all the communication was controlled by the mass media. But we need to keep on talking. And not taking for granted what politicians are telling us, because most of them are telling bullshit. I think most of the people in the Middle East are ready for peace. It is just a matter of time. We now need the right politician make the right move. People are still afraid on both sides, but it is going to happen. It is just a matter of time. Especially in Israel. People from the right wing, they know somehow in their mind that it is going to be a 2-state solution. It is going to be an Israeli and a Palestinian state.

SL: What do you believe in?

RE: I am an optimist. I believe that it is going to happen. That we have a Middle East like we have a European system; open, no borders. Where the people of the Middle East are working together. It would be great if everybody could enjoy that. It would be good for Israel, because we have so much technology to export and it would be so positive that Israel could be friendly with Lebanon, Iraq and Iran. That these countries are not talking to each other doesn’t make any sense to me anymore. This is really ‘Old School’. The young generation doesn’t believe in this. And this is not a religious thing. We have issues with the Palestinians, but this is a territorial issue and we can resolve that. It all has to start with the people, they have to push the leaders as the leaders should be a mirror of the nation. Currently they are not leading. But if the people will push them, a new leadership will grow out of these ideas.

SL: What is it that breaks your heart the most?

SL: What is it in life that excites you most right now?

RE: I am very happy that I can do this. What is really exciting is the opportunity that has been given to me. I didn’t plan for this. I just posted one poster on a night and I have to embrace the journey. Sometimes I think “wow, this is happening to me”. I am very grateful for that. This seems to be my calling.

SL: In most of your messages you use the ‘heart’ sign or the word ‘love’. What does love mean to you? 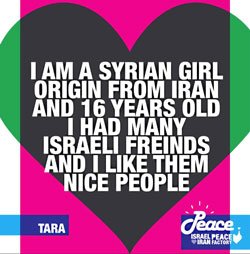 RE: Yes, I am really cheesy. [Both laughing now]
You know, I am not the one who used to say this, but love really comes down to understanding. It used to be more of a romantic love for me. But now, love to me is when you really know something. The simple love of understanding somebody as a true person and that you can recognize him as yourself. So this is love to me.

SL: You have 2 beautiful children. How do you teach them HOPE?

RE: I just try to teach them to be good people. I try to teach them my own values. To always be fair, to be nice, to be kind, and always be honest. And when you get that, you will also get hope. It is part of the package. You can’t have hope if you’re not a good person. It’s all related.

SL: At the end of the TED talk, we see an emotional Ronny Edry. Can you describe what you felt at that moment?

RE: When I gave the talk, until the very last minute, I was like out of space. Like an out of body experience. Very strange. I was very focused on what I wanted to say. And at the end the audience stood up, all with a paper heart in their hand and started applauding. Very overwhelming. “What did I say?” It was a very emotional moment for me to see the people react in this way.

SL: That is beautiful Ronny!
What have you learned so far during this journey?

RE: What I have learned is that we have to make a first step. We have to step out of the ‘fear box’, because people are so nice. We just have to go out and meet them. There are way more good people than people with bad intentions. We always give the media the opportunity to spread the bad news. In the morning news, the newspaper and the Internet. And we almost start to think that this is the reality. This is not the reality! The reality is all those good people who want peace. Who want a life! And I have learned to give those people a voice and show their faces.

SL: Do you have a final message for us?

RE: Just do it! Go out and meet the people. Try think outside of the box and meet that person you are so afraid of. Make that first step. This is actually really easy on social media. Go out to them and say “hey dude I am from America” and chat for a few minutes. Once you make that first connection… That’s it. It is also our duty to change a system we’re not happy about. We can complain about it, but you have to do something. We just have to make small steps. It counts more than you think. 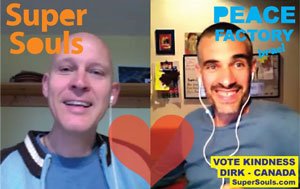 SL: This reminds me of the following; Jimmy Hendrix once said: “When the power of Love overcomes the Love for power, the world will know Peace.”
We wish that you, your wife Michal and your kids will be able to move even more people so that a whole nation will radiate the ‘power of love’.

Thanks very much for this wonderful interview Ronny.