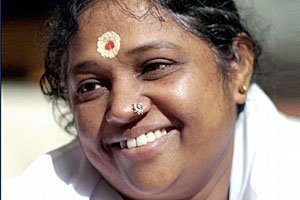 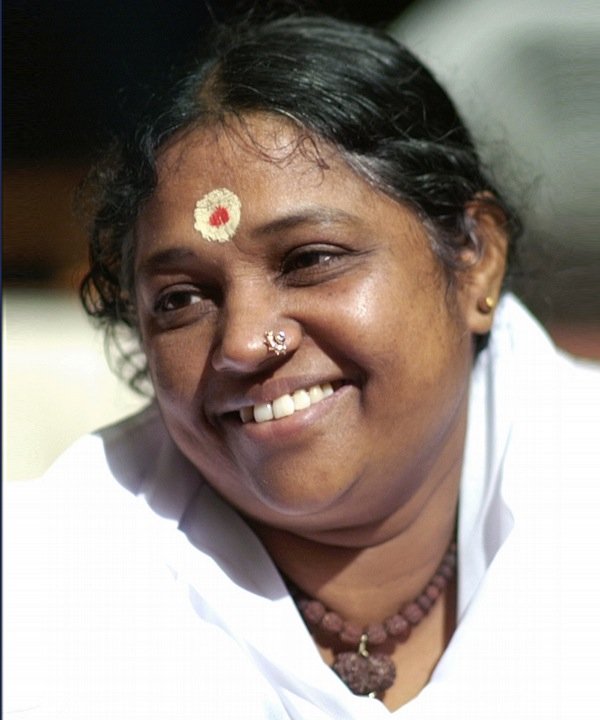 Seva, the Sanskrit word for selfless service, can also be translated into volunteerism in the United States, and one of the most notable figures engaged in the act of serving others is Amma. Sri Mata Amritanandamayi Devi is a world-renowned humanitarian and spiritual leader, affectionately referred to as Amma or “Mother,” and it’s easy to understand why.

While Amma’s touring programs include guided meditation, devotional singing, and spiritual talks for personal fulfillment, the primary reason many come to see Amma is to receive her unique darshan (spiritual blessing) — a physical motherly embrace. Widely regarded as “The Hugging Saint,” Amma will sit for upwards of 14 hours or more to wrap her arms around those who’ve come to see her.

In addition to developing programs that genuinely and effectively make positive social change around the world, what is perhaps one of the most remarkable elements of Amma’s effort to embrace the world is that every one of her programs is entirely run by volunteers. Individuals from all walks of life continue to be inspired by what Amma represents.

When asked why they’re doing volunteering, these individuals answer in reasons that span simply feeling uplifted to feeling compelled to change their lives completely in order to be a part of her work.

“You’ll find that there’s an entire cross section of people who volunteer with these efforts,” Amma’s press liaison, publisher Rob Sidon (a volunteer himself) observes. “This is real bhakti, a service and devotion to God that’s fundamentally rooted in love. Amma has taken philosophy and brought it to the next level. She’s given 33 million hugs and counting. I mean, even if you don’t believe in miracles, when you watch she’s doing in that area alone, it’s amazing. In the end, what she offers is something different for everyone”.

Embracing the World
BrightStar Live Events spent the day in Los Angeles on June 10th to experience Amma’s tour firsthand. As we arrive, a diverse array of people are milling about in the several rooms set aside specifically for the event. One convention room offers authentic Indian eats for participants to enjoy while another features a gathering of vendors selling everything from books and essential oils to Amma dolls and clothing. Everything is designed to benefit Amma’s charities for funds raised from retreats and the sale of food, books, and gifts directly support the humanitarian projects of Embracing the World. 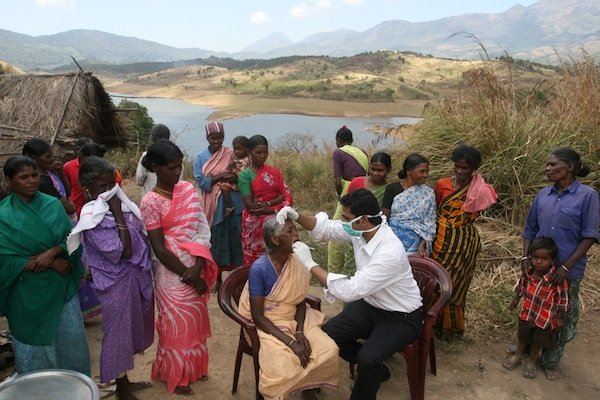 “The scope of charities and humanitarian efforts she has created is mindboggling,” Rob continues and the booklet we receive upon walking into the main room is evidence to that fact. Titled “The Humanitarian Initiatives of Sri Mata Amritanandamayi Devi”, the thick booklet is filled with page-after-page of descriptions on Embracing the World global programs from past to present, and even includes an updated 2013 insert.

Embracing the World projects is built upon Amma’s devoted intention to awaken love and compassion within individuals everywhere, which she believes makes a substantial impact upon world peace and harmony. Embracing the World efforts include orphanages, homes for the homeless, scholarships for poor children, hospitals, disaster relief, and microfinance-powered initiatives for women. Started in India in the mid-1970s, these efforts have now expanded into other countries around the world.

To date, Embracing the World has provided free medical care to more than 2.6 million people; built more than 45,000 homes for the homeless throughout India, and provides financial aid for 59,000 people unable to care for themselves. It also provides vocational and literacy training; runs orphanages, hospices, old-age homes, scholarship programs; plants trees; and much more.

In India, Embracing the World’s projects are managed by the Mata Amritanandamayi Math, an NGO (non-governmental organization) that has had consultative status with the Economic and Social Council of the United Nations and the UN’s Department of Public Information. The organization has received praise from many government officials for acting quickly in response to those in need from the flooding in Mumbai, Gujarat and Bihar to the earthquakes in Kashmir, Haiti and Japan to the cyclones in West Bengal to the hurricanes in the United States.

“Truly, Amma hugs every person in a way that a mother with her child”.

Getting a Hug from Amma
When we walk into the room where Amma sits on a beautifully decorated stage — the same place she’ll be long into the night to offer darshan — we’re invited up to join her. The stage is bustling with people standing and sitting in rows of chairs to her left and right.

Amma is in the center, colorful Indian-inspired cloths hanging behind her and attendees surrounding her in a semicircle cluster. She smiles and chats with both the people she’s hugging and those who’ve made their way onto the stage.

Volunteers help to organize the rows of people ready to receive hugs, bringing one person up into her arms the moment she finishes embracing the person before. The darshan process is quite seamless, where individuals are handed tokens and called to the waiting area in batches. Ultimately, it’s a wonderful opportunity to practice patience while sitting amidst hundreds of others waiting to receive a hug listening to live kirtan music played before her, including young children chanting impressively.

The moment one kneels or sits before Amma, her attendees are guiding the placement of your head and arms in such a way, so that she can chant a mantra directly into your ear. Amma often takes her hands and gently pushes the recipient away so that she can look at them, then brings them back to her, gently rubbing a person’s back.

Truly, Amma hugs every person in a way that a mother with her child. Every individual walks away with a Hershey’s Kiss or two and flower petals from Amma’s own two hands.

How Amma Became The Hugging Saint
Amma herself was born into a simple family of Kerala fisher-folk in 1953. And, based on her upbringing, Amma has broken all traditions and conventions to become the first woman in India who’s physically touched others in the way that she has with her hugs.

As a small girl, Amma would spend many hours in deep meditation to her parents’ confusion. “In India, women are expected to remain in the background,” Amma recalls. “It is said that ‘Even the walls should not hear them.’ My family could not understand my way of reaching out to people; they had no idea of the basic spiritual principles.”

Despite her family’s poverty, Amma would gather food scraps from neighbors and bring food and clothing from her own home to help alleviate the intense poverty and suffering of others. Her family scolded and punished her, yet she continued on.

While it was not permissible for a 14 year-old girl to touch others, especially men, Amma followed her heart explaining, “I don’t see if it is a man or a woman. I don’t see anyone different from my own self. A continuous stream of love flows from me to all of creation. This is my inborn nature. The duty of a doctor is to treat patients. In the same way, my duty is to console those who are suffering.”

Though born into the Hindu faith, Amma steadfastly supports all great religions, encouraging aspirants to go deeper into their own traditional paths. “There is no harm in having many religions and faiths,” she says. “But it is harmful to think they are different, and that one faith is higher and another lower.”

In her speech at the U.N., Amma described the real source of historical world conflict as “lack of awareness of our true nature.” She continues to counter male-dominated religious custom in India by advocating for women to serve as priests in the temples. “Women too love God,” Amma has declared. 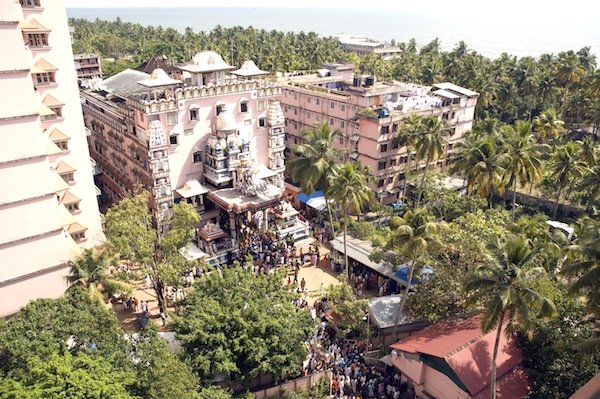 Today, Amma’s birthplace in Kerala has become the headquarters of Amma’s worldwide volunteer social-service organization. Home to more than 3,000 residents, the organization is a place to share Amma’s teachings, study the world’s scriptures, practice meditation, and dedicate oneself to Amma’s charitable service projects. Her dream, written on the back of the booklet we were given, is simple:

To learn more about her humanitarian endeavors and how you can become a volunteer, visit www.embracingtheworld.com.