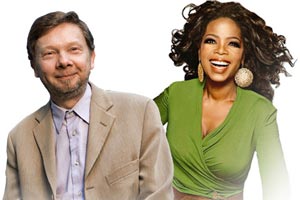 In the exclusive video clip above, Eckhart Tolle talks about stillness and how it saved him when he was pushed to the limit – this is all about Self Love.

As part of the Super Soul Sunday block of programming and for the first time on television, OWN will be airing Oprah & Eckhart Tolle: A New Earth based on their wildly successful 2008 web series based on Eckhart’s book A New Earth, which has been viewed by over 40 million people.

Oprah and Eckhart Tolle present their 2008 web series on Eckhart’s groundbreaking book A New Earth. The premiere episode introduces the book with personal stories from Eckhart and discussions of consciousness, presence and purpose.

For the first time on television, Oprah and spiritual teacher Eckhart Tolle present the 10-part series Oprah & Eckhart Tolle: A New Earth. Oprah and Eckhart take viewers on a chapter-by-chapter journey through Eckhart’s seminal work, A New Earth: Awakening to Your Life’s Purpose, and have thought-provoking discussions that teach viewers how to focus and become more aware and present. Watch the series debut on Sunday, March 23, at noon ET/PT immediately following the season premiere of Super Soul Sunday.

Oprah and Eckhart take viewers on a chapter-by-chapter journey through this special 10-week series which has helped students awaken to their life’s purpose. These thought-provoking discussions, framed with brand-new content, will teach viewers how to focus and become more aware and present and to begin to understand the motivations of the ego. Oprah and Eckhart create a true global classroom, answering questions via Skype, email and phone from readers all around the world who are fascinated by Eckhart’s ideas on presence and awakening. Oprah and Eckhart interact with real people dealing with real issues and give practical advice on how to apply the concepts of A New Earth in order to bring more peace and joy into people’s lives.