Ronny Edry from Israel, is the driven force behind ‘Israel Loves Iran’ on Facebook and who delivered a high impact speech on Tedx Talks. Reasons for us to have a closer look at ‘what’s behind the curtain’.

You can find our interview with Ronny Edry here. 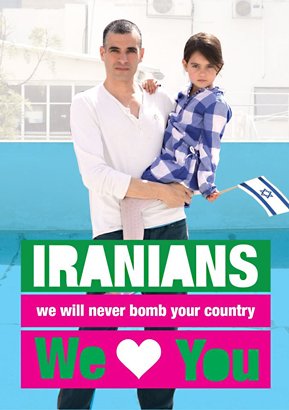 Ronny Edry is a graphic designer, teacher, husband, father of two kids and he lives in Tel Aviv. In March of 2012 one of his images, which he posted on Facebook, drew international press attention. The image showed himself and his daughter, together with the words ‘Iranians, we will never bomb your country. We Love You.’
The image became a catalyst for dialogue between the people of two nations on the brink of war.

Fear Rules
Fear rules the region of the Middle East and war seems to be their curse. With fear and war come poverty, racism, and fundamentalism.
After years of wars and conflict, many Israelis have sadly lost faith in peace. They are mainly occupied with economic issues.
But Ronny strongly believes that peace still needs to be the focus in the debates. Peace is the key to most of the problems in Israel and in the region.

Edry’s philosophy is the following: “The rhetoric needs to change. We need to be talking about making peace with our neighbors, to raise our voices and say: Yes, we believe in peace and it has to be the priority of the next government! The times have changed. Our neighbors are not our enemies; they are our partner for peace. Let’s talk to them, let them be our friends, let’s hear their voices raised for peace.”

Ronny founded The Peace Factory and through this organization he will show people the way. The Peace Factory has been working to show the world that the people of Israel and Iran don’t want war and can be friends. And this is happening right now. The community is huge. In their images they usually show two people accompanied by the following words: “We are not enemies. We don’t want war. We are not ready to die in your war. We Love each other.” The thousands of messages have already reached hundreds of thousands of citizens from all around the world including the Turkish, Syrians, Lebanese and yes also Palestinians.

When we browse through all the photos and messages, we can only draw one conclusion: The average Israeli and Iranian don’t want war. They want peace and live a peaceful daily life with their families, being able to provide good education for their kids, being able to pay the bills each month, to go to work, to buy food and… to Love each other.

Ronny Edry, you are an amazing person, we love you and you are are Super Soul!

For more information (and support): The Peace Factory